The following articles provide details on the history on Wallasey Motor Club. If you have any information relating to the club history and or previous members, please email webmaster. 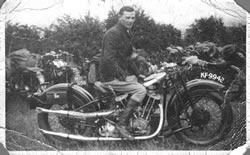 Hello,
I came across this web page when searching for information on Wallasey and have some informationthat that might help with compiling a club history if that is your intent.
I was brought up in Wallasey and lived on Belgrave Street from 1939 to 1963 when I was married and moved to Neston. Much of what I know about the club came from my grandfather who raised me after my dad remarried. My father was John Crester Pringle, known to his friends as Cres, and he was a good friend of Les Graham and was involved with the early formation of the Wallasey MC. Like Les, my dad raced and I have just received a picture of him on his OEC which my brother John has just discovered. My grandfather often told tales of my dad’s racing. He told me the bike was an OEC with a V-Twin JAP engine. He would complain that the bike was eventually damaged from too much racing on sand. He told me that dad and some of his cronies marked a measured mile on Leasowe Road at about 4:00 a.m. one morning to see if dad could get the OEC to exceed 100 mph. I believe that it did!
As a schoolboy I was a big fan of Les Graham, and the only time I was late for school (Wirral Grammar School) was because I was listening to the senior TT and Les was leading on the AJS Twin Porcupine. He broke down about three miles from the finish – it spoiled my day. The only good news was that I was so late that the school monitors had left their posts.

When Les Graham was killed on his MV Augusta in the Isle of Man I was sent down to his family’s home with photos from my dad, but have no idea what they were. Dad had a bad crash on a motorbike (I believe in Mold) just at or after the end of the war and was left with a stiff leg. He was still interested in motorbike racing and I recall a number of trips to Rhydymwyn to attend race meetings. Somewhere in my collection of family stuff is another photo of a camping trip in Wales (I presume) with a motorbike showing. There are a number of people that I don’t recognise, but may be Wallasey MC Members. I can send this and a copy of the OEC picture to you if you would be interested? Back in the late 1950’s a friend of mine, Dave Burnley, was an active member of your club and he might also be able to contribute to your history. Dave still lives in Wallasey.

The following article has recently come to light and now shows that the club was actually first formed in 1929.

(This is reprinted from an original Kart Meeting Programme held at the Tower Stadium, New Brighton in 1960)

The Wallasey Motor Club is made of men and women who either have motor cars, motor cycles scooters or karts (or else they share one with their husband or boyfriend). It’s a friendly Club, although at times we flare up over something or other which is important to us as a Club.

Before the Club was formed, a group of riders including the late Les Graham, used to meet on the waste land on Gorsey Lane every Sunday, and from there a crowd of maybe thirty riders would set off on a run. These riders held together so well that they decided to form a Club and so in 1929 the Wallasey Motor Bike Club was born. Entrance Fee 3/- and Yearly Membership 10/-. (In fact we are proud to say that membership is still only 10/- a year, with reduced rates for the under 18’s and lady members). The first Club Headquarters were over a stable (I think this was in Rice Lane) at a rent of 5/- weekly and it was patronised every night of the week, especially on Sundays after Club Runs, when they would settle down for a game of Housey-Housey (now they call it Tombola). As to the sporting activities, the Club held four closed trials a year.

Many of the members either raced or acted as Marshals at the meetings held by the Oswestry Club at Park Hall, Oswestry. During the following years new faces appeared on the scene and the sporting activities have increased. Club Headquarters are now at the Grange, Grove Road, and Club Night is Friday night from 8 pm. Every alternate week is Business Meeting when we all get together to argue about things past and present. The alternating weeks are Social Evenings. Sporting activities are held every month on Sundays. Usually it takes the form of a Rally, with classes for cars, three-wheelers, motorcycles and scooters. We have serious Rallies, and others not so serious. Now and then they end up with a Barbecue. Trials riders are well catered for with both closed and open events, which are well supported. Apart from these events, camping is a regular feature of the Club activities during the summer months. The Club has its own equipment and regular camping ground in North Wales. Club Runs keep some members busy, these are always well organised, and woe betide anyone breaking the rules laid down by the Highway Code. Anyone having mechanical trouble with their vehicle can depend on both technical and pm practical assistance from a host of amateur and professional mechanics.

Maybe you are interested in meeting some of us and finding out more about the Wallasey Motor Club. Provided you are keen and prepared to take a wholehearted interest in the Club – you will find a warm welcome and you will soon find yourself rubbing shoulders with people who have the same interests as yourself. The Motorcycling members do not make a practice of haring around town and country at a ridiculous speed, and attired in black leather jackets fur collars and minus a helmet, using pedestrians and other road user as obstacles on a race track.

Our Car members do not all appear in cloth caps complete with sports cars, nor will you see our vehicles lined up outside public houses while we hold up the bar. If you do see road users treating others with respect, and obviously knowing how to act whilst in charge of a motor vehicle, take a closer look, maybe you will see a Wallasey Motor Club badge.